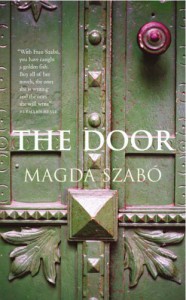 The Door is a novel by Hungarian writer Magda Szabo. The novel documents two decades of life in Budapest after the Communist takeover in 1948, The novel tells the story of a developing and complicated relationship between a young Hungarian Writer and her housekeeper and is partly autobiographical.

Having visited Hungary only last year I was up to date on the history and was glad of that when reading this novel. The book started out promising but the further along I read the more I became frustrated with the character's actions and the repetitive nature of the novel. I know this is a favorite of many but I just couldn't relate to Emerence's rages and tantrums and never felt I understood her or indeed her employer or their actions and while the book is very readable and there are moments where it captured my imagination but I cant honestly say I enjoyed the novel and hence my 2.5 Rating.