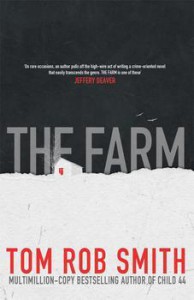 The praise on the blurb of this novel really leaves you to believe you are about to embark on a " Chilling, hypnotic, and thoroughly compelling novel. You will not read a better triller this year"

The Novel is set in Sweden and tells the story of Chris and Tilde who retire there to a farm in a remote area to recapture what could only be considered the good life while their son Daniel remains in London. Daniel receives a call from his mother who sounds stressed and she tells him she has uncovered a terrible conspiracy, He later receives a second call from his father to say his mother is delusional and has just discharged herself from psychiatric hospital and so the mystery begins.

I was very disappointed with this novel and my disappointment began with pace of this story as the author slowly builds the story (very slowly) and while Tilde revels the details of the conspiracy to her son throughout the first 3/4 of the novel I became bored and found myself wishing she would just get on with it as the slow reveal just took the suspense and good out of the novel and it became repetitive and had none of the zest and imagination of Child 44. I didn't find enough drama in the story to make it a compelling read.

I found the characters very bland and their actions within the story not believable.

The only part of the novel I enjoyed was the descriptions of rural Sweden and the customs of the people and while interesting not enough to keep me engrossed or satisfied.

There was one paragraph that I wondered about...... My mum reached into the satchel and pulled out a knife instinctively I recoiled, a reaction that concerned my mum. The entire knife was carved from wood, including the blade painted silver to resemble metal. Would you really get through security with this knife in a carry on satchel going on a flight to London while I was stopped on numerous occasions for having a bottle of water and lipstick in my carry on bag.