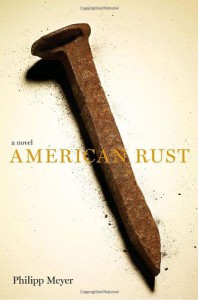 American Rust by Philipp Meyer is set in the fictional town of Buell amid the decaying industrial landscape of Mon Valley Pennsylvania.

Isaac English and Billy Poe are best friends both still hanging around the decaying town of Buell and wanting out, Isaac is caring for his sick father while his sister Lee has moved away. Billy Poe has missed his chance to become a football star and finds himself attracting the attentions of the law on several occasions. Isaac plans his escape and on the day of his leaving town something happens that changes the two friends fates and test the loyalties of their friendship and those of families and loved ones.

I really enjoyed this slow paced novel and thought the writing was really good. The story is written from the alternating view of the novel's characters and this I really enjoyed as I found the story came through very clearly. The characters are totally believable and I found a wonderful sense of time and place in the novel. The town's demise after the a downturn in the steel Industry is very relevant to this story and we clearly see how people who once had purpose have lost their livelihoods and their self esteem and at times the novel could border on depressing.

After reading this book I would be wary of recommending it to friends as as its one of those books that is not going to be everybody's cup of tea but I enjoyed the read and will look out for other books by Philipp Meyer.