A Prayer for Owen Meany 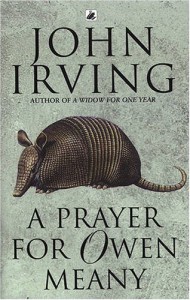 For the first 150 pages I was totally engrossed in the story and the characters of John, Owen, John’s Mother Tabitha and Grandmother. But as the story progressed it became bogged down with an over abundance of details, facts and political and religious opinions and at times I found myself totally switching off and longing to get back to the story I started.

I really felt so divided about whether I loved or hated this novel, I loved the humour and the sadness in the novel, I enjoyed the characters, I loved the sense of time and place that John Irving managed to create by his vivid writing. There are some really smart passages from this novel that I totally loved

and regarding the death of Marilyn Monroe
“ it has to do with all of us said Owen Meany, when I called him that night, She was just like our country-not quite young anymore, but not quire old either, a little breathless, very beautiful, maybe a little stupid, maybe a lot smarter than she seemed”

I loved the characters and felt I know each and every one of them I especially loved Tabitha and Grandmother but did not enjoy the character of Owen or John although I did appreciate how well they were written. I love how the author brings to life all of his characters and I enjoyed the fact that they all had a voice in this novel while some were entertaining some were downright boring as in the case of John but they all have a place in this story.

There were times in this novel I hated this book and was tempted so many times to throw in the towel as I found parts of the story so boring. I especially disliked the Christmas Nativity Section and while I read the long winding and boring description of this play and its characters and happenings I think my mind was a million miles away. I also felt that the author was preaching to me throughout the novel and I really disliked his political and religious ramblings.

I think if I could draw a bar chart for each chapter I could better represent my highs and lows on this novel than writing a review. Its not a book I would recommend to my friends but having said that I am glad I finally got around to reading this Novel. A difficult book for me to rate but I think I have settled on a 3 star rating as I liked it but did not love it and found it way too long.
Tweet