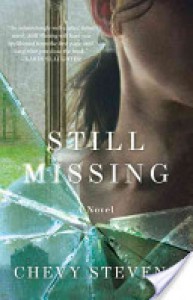 Annie Sullivan is a realtor from Vancouver Island who at a open house viewing is abducted and bundled into a van by a man she later comes to know as the freak. She is transported to a cabin somewhere in a forest. Much of the story is then told by Annie to her therapist and we lean the horrors she physically and mentally endures in captivity and how she eventually escapes. Wanting answers as to how this could possibly happen to her Annie learns the truth of her abduction.

This book has been getting rave reviews and I decided to buy it in audio format to listen to as my running companion and trust me it certainly had me running faster!

The book is a page turner and you really are caught up in the drama. The first 40 pages I wasn't sure if I would continue to listen as I found it a little uncomfortable and was not sure it there was going to be too much graphic details for me. But it is not too graphic and as I wanted to find out what happened and continued with the book and was rooting for Annie all the way. I liked the character of Annie but found the other characters totally flat.

I wasn't convinced by the last part of the book and that is the reason for my 3 starts. I liked it but did not love it.

The audio version was extremely well narrated for anyone who would rather listen to the book.
Tweet