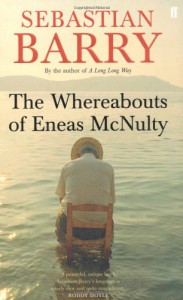 Following the end of the First World War, Eneas McNulty joins the British-led Royal Irish Constabulary. With all those around him becoming soldiers of a different kind, it proves to be the defining decision of his life when having witnessed the further of a fellow RIC Policeman he is wrongly accused of identifying the executioners. With a sentence of death passed over him he is forced to flee Sligo, his family and friends.

The writing is wonderful and vibrant and his use of elegant prose while beautiful becomes a little overpowering as I felt the plot lost out to the prose in certain paragraphs.

I did enjoy the characters and while I found sections of the story moving and exciting I thought the author failed to elaborate and take advantage of the readers interest and emotions in these situations and I was left wanting.

If I had not been up to date on Irish history I would have been quite lost reading this novel.

There are similarities between the whereabouts of Eneas McNulty and The Secret Scripture. The Character of Roseanne comes into play in both novels which I really found intriguing.
I really loved Barry's [b:The Secret Scripture|3419808|The Secret Scripture|Sebastian Barry|http://d.gr-assets.com/books/1325714117s/3419808.jpg|3460278]and one of favourite books by this author is [b:A Long Long Way|379087|A Long Long Way|Sebastian Barry|http://d.gr-assets.com/books/1348294749s/379087.jpg|368906] a novel that has all the elements of great historical fiction as the writing is superb and the historical content and plot are excellent.

The whereabouts of Eneas McNulty is a worthwhile read but pales in comparision with the authors other novels.
Tweet