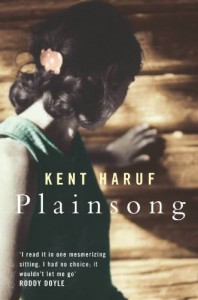 3.5 stars
Plainsong by Kent Haruf is a beautifully written novel and a nice easy read. This novel tells a simple story describing the lives of some of the residents in Holt, Colorado.
Tom Guthrie is a history teacher at the area high school. He is left to raise two sons Ike and Bobby after his wife abandons him and their family.
Victoria, a 17 year-old high school senior, is thrown out of her house by her crude and bitter mother after she had learned that her daughter is pregnant.
The McPheron Brothers are two bachelors brothers who live out on their farm and who have little communication with the community.

For me Plainsong was an enjoyable an easy read and I loved the characters and the atmosphere of the novel. However I did have a couple of issues with the novel and the first one was trying to figure the time setting of the story, as starting out I figured it was set perhaps 50/60s and further along I would have set it in the 80s.
It did leave me a little frustrated.

I also was not convinced by the relationship between Victoria and the McPheron Brothers. The fact that two elderly bachelors would take in a pregnant 17 year old girl was a little bit farfetched for me.

This novel is certainly worth reading, there are no major plot twists and no real surprises however the writing is so beautiful and certainly worthy of the praise that this book has received.