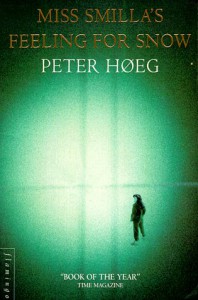 Miss Smillas Feeling for Snow is an utterly bizarre and strange novel.

"The Novel is set in Copenhagen where six year old Isaiah falls to his death from city rooftop. The police pronounce it an accident. But Isaiah's neighbour Smilla suspects murder. She embarks on a dangerous quest to find the truth, following a path of clues as clear to her as footsteps in the snow"

I found this novel such a drag as the plot was boring and really did not like or care about the character of Smilla, I really found myself distracted while reading the novel to the point that I could have read a whole paragraph and had no idea what I read. I loved the Girl with the Dragon Tattoo series as felt it was a page turning thriller and had thought this would be similar but for me Miss Smilla's feeling for snow was very forgettable novel and a one star read.