That They May Face The Rising Sun 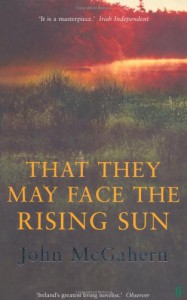 John McGahern's Novel "That they may face the rising sun" is the first Novel I have ever read where very little happens and yet everything that does happen is magnified by McGaheran’s’ amazing art of storytelling and the vivid images he creates of Irish rural life.

Joe and Kate Rutledge have come to Ireland from London in search of a different life. In passages of beauty and truth the drama of a year in their lives and those of the memorable characters that move around them unfolds through the actions, the rituals of work religious observances and play.

I loved the relaxed pace of this novel and the wonderful characters which include James and Mary Murphy who rarely travel from their local area; John Quinn, a notorious womaniser; Kate's uncle The Shah; Bill Evans, a farmer and James Murphy's brother who works at a Ford plant in England. The characters are so realistic that I was able to identify with characters I had encountered throughout the 80s in rural Ireland.
Throughout the novel I was trying to place what year the story takes place as some parts hints at the 50s/60s and others the late 80s(which was where I would put it) and I think readers will make it fit the timeframe that suits them .

The book is an extremely calming and relaxing read. It takes an honest look at Irish life in a small rural community and how local news and gossip played a huge part in their daily lives. It also deals with immigration and the struggles people have in everyday life and most importantly the beauty of the simple life.
I especially loved the mood of the 80s Ireland and vivid descriptions of the changing of the seasons in the countryside. John McGahern really knows how to set a scene.

I REALLY enjoyed this book and found it a nostalgic read. A word of warning! this as I have stated earlier is not a plot driven novel and its slow pace will not suit every reader.

My only criticism would be that characters seemed to consume whiskey far more than tea and this was just a tad unrealistic in the novel!