And the Band Played On: The Titanic Violinist & the Glovemaker: A True Story of Love, Loss & Betrayal 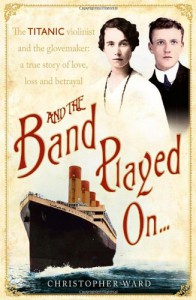 On 14th April 1912, 1,497 passengers and crew lost their lives on The Titanic's maiden voyage. As the ship sank the orchestra took their instruments on deck and continued to play.

A young man by the name of Jock Hume who played the violin with this Orchestra lost his life that night while his finance Mary who was expecting their first child was awaiting his return back home in Scotland.

This is a fascinating story of the Hume and Costin Family and offers a different side of the Titanic story as the author takes up where many other Titanic books finish and tells the story of what happens after the ship goes down.

I found the first few line of the introduction of this book fascinating and was hooked after reading the following;

" Of the 1,497 passengers and crew who died in the North Atlantic that night only 328 bodies were recovered, one of them was my grandfather, Jock Hume a violinist in the Titanic's band. He was twenty one. His pay was stopped the moment the ship went down and two weeks later his father received a bill for the White Star line brass buttons and epaulettes on his uniform"

I found this was a moving and well researched book and the author while recounting the tragic story of his family's history manages to give the reader a great historical account from the moment the Titanic sank and this was information that I had not read before.


I have read quite a lot about the Titanic through the years but really enjoyed this book as it was really well written and a real page turner.