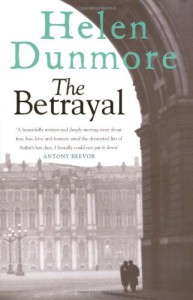 Having read Helen DunmoreThe Siege I had her sequel on my shelf for a very long time and decided it was time to read it. I wasn’t blown away by the The Siege but still was intrigued by the blurb of The Betrayal and decided to read it, but this novel is also a bit flat and dull.

Set in Leningrad in 1952 toward the end of the reign of Stalin, Anna a nursery school teacher, and her husband Andrei a doctor live a quiet existence in their two room apartment. They try hard not to come to the attention of the authorities but when Andrei has to treat the seriously ill child of a senior secret police officer he finds himself and his family caught in an impossible game of life and death.

The blurb makes you want to delve into this book and read and read to the end but for me this was a slow and flat read and I felt there was something lacking in the story perhaps it was the lack of historical detail or no connection with the characters, I also found the climax of the story frustrating and lacked imagination.

On the plus side I felt that Dunmore portrayed the fear and the suspicions of the time very well and how living in fear of your neighbours and friends was an everyday and real occurrence, this is a short novel and not too taxing. Having read a good few books on this period of history this is not one of the better ones. I would still really recommend Child 44 and City of Thieves