Ester and Ruzya: How My Grandmothers Survived Hitler's War and Stalin's Peace 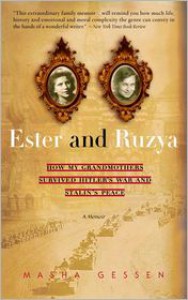 A memoir of two Jewish women and what it ment to be a Jew under Hitler's rule and equally brutal Stalin's rule. Researched and written by their grand-daughter Masha Gessen the book is rich in history and family research. I tend to enjoy this blend of historical depth with personal experiences and Ester and Ruzya stories are full of character and life as they bring us through the terrible times of the twentieth century. Books like this are important and tend to give a valuable insight to family life lived through these dark and dangerous years.

"In the 1930s as waves of war and persecution were crashing over Europe two young Jewish women began separate journeys of survival. One became a hero in her childrens and grandchildren's eyes and the other a collaborator".

This book was a really interesting read but having said that I had a difficult time initially connecting with the story as the difference between Ester and Ruzya's stories were initially difficult to follow and I found myself at times confused as to whose story was whose. By 100 pages the story did come together and the second half of the book worked better for me.

I had this book sitting on my bookshelf for a long time and was glad to have finally had an opportunity to read it.
Tweet