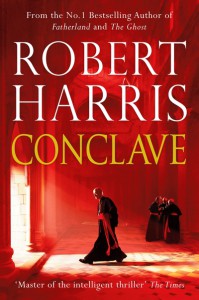 A captivating and intelligent thriller that takes us inside the Vatican for an election of the new pope.

I wasn't entirely sure I wanted to read this novel but something about it's cover drew me to the book and the fact that a couple of my goodread friend's enjoyed it I knew I had to step outside for comfort zone and give it a try and what a enjoyable and interesting read it was. It's one of those books that quietly sucks you in and you just keep turning the pages.

Conclave, as its title title suggests, is about a papal conclave set sometime in the near future. The pope has died and the cardinals are gathering to elect his successor, cardinals from all over the world, some have ambition and some are rivals but each one will cast his vote in the World's more secretive election.

This is one of those books that is a slow but effective burner, the writing is good and the plot entertaining. I loved the character's of Lomeli, Sister Agnes and O'Malley. Its a short read I think it would make a great book club discussion book.
Tweet